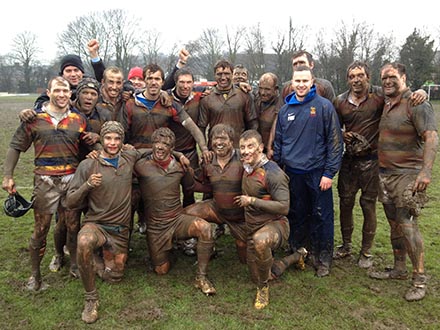 KCS Old Boys RFC was founded in 1907 and plays its home games at Dornan Fields on the pitches behind the school grounds at Kingsway. The rugby club are fortunate to be the primary users of the Old King’s Pavilion which has good facilities and is a short walk from Motspur Park train station, itself only a little over 20 minutes from Waterloo.

The main pitch has match quality floodlights and hosts several evening games (club games and occasional KCS 1XV fixtures) per season as well as being used for training in the Winter months.  Many boys at KCJS & KCS are likely to have played at the club in the Mini and Junior sections.

We run two regular adult sides and an U21 XV during the university holiday periods. The 1XV and 2XV have achieved success in recent seasons and our 1XV are one of the highest placed Old Boys teams in London & the SE and presently compete at Level 6 of the RFU competition pyramid.

Pre-season runs from June – August and the League season from September to April. We train every Tuesday with hot food provided afterwards. Physiotherapy is offered to players both on match days and at training, with two physios covering both senior sides’ fixtures.

Should you wish to get involved or to find out more please visit our website, contact our Director of Rugby (details below) or simply pop down and meet us.

This page is: rugby so the calendar events will be related to rugby
No events 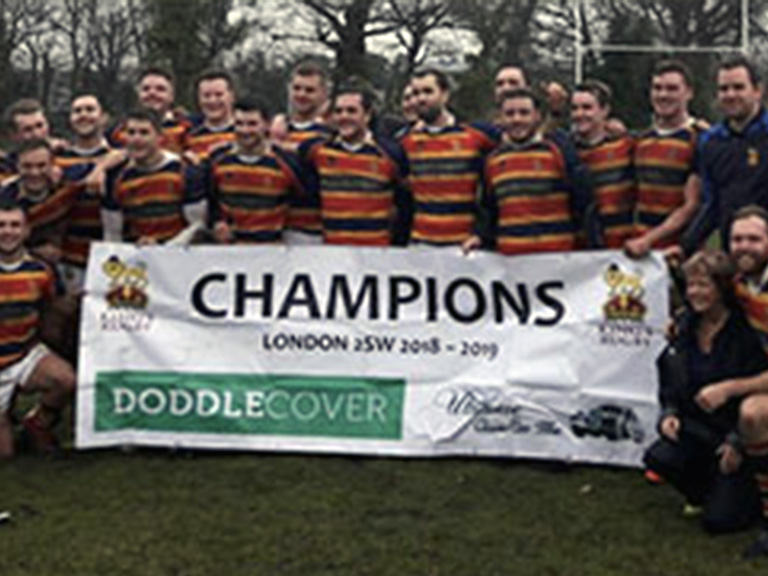 Having re-established their place back in London 2SW at the culmination of the 2013-14 season King’s have enjoyed a solid four seasons back at Level 7 finishing 5th, 6th, 8th most recently 4th.

Whilst the side finished last season impressively with 21pts from 25, this campaign has been better again as the team started well and has gone from strength to strength recording a series a victories, each one with a four try bonus point. This culminated in win number seventeen last weekend over Farnham and with a maximum 85pts achieved it meant that King’s were confirmed as league champions and were promoted to London 1 South. This achievement was made all the more special by virtue of being the first side in the English rugby pyramid to achieve this double honour and having done it at the very earliest opportunity in mid-February.

Coached by Sam Richards (OK 2005) and captained by Tom Dugarin (OK 2007) with able support from on-field captains Will Slater (OK 2008) and Joe Mason (OK 2009) the success has been built on a core of players whose association with the club goes back many years and several of whom have played together through the Mini, Junior and U21s sections. Allied with some wise heads who have been involved in senior rugby for a number of seasons, the formula has proved to be a winning one.

Level 6 is the highest the club will have competed at and will come with the added mileage associated with travel not just to Surrey and Hampshire but also E & W Sussex, Kent and even Essex. It is a 14 team league so there will also be 4 more fixtures to fit in to the season calendar. Still, all these challenges shall be embraced and hopefully overcome of course.

Before then though there remain five games left to play – Twickenham (A), Old Emanuel (H), Old Reigatian (H), Old Cranleighan (A) & Old Alleynian (H) – and the team will have to maintain the high standards set to this point if the umblemished record is to be maintained!

Regardless of what remains in 2018-19 this has aleady been a season to be proud of, we hope you’ve enjoyed what you have seen and will continue to lend your support in the next couple of months and the years to come.

The season is nearly at the half way stage and the 1XV is now in 4th place in a highly competitive league. The games we have lost have generally been as a result of conceding tries from rolling mauls, something we do not do as well as other teams at this level. The game on Saturday against league leaders Cobham was a perfect example of this and we lost a great game by the margin of 30-28. Having said that we have had some marvellous wins and the win against London Cornish at the beginning of the season stands out. Our brand of rugby is highly entertaining and worth visiting Motspur Park. This Saturday we entertain Portsmouth at home (KO 2:pm).

The 2XV have also played some entertaining matches culminating in a 23-22 pont win against Camberley 2XV last Saturday. This Saturday they are also at home to Teddington.

Two good wins on Saturday. The last game of the season for the 1XV which leaves us sitting in 5th place in the league. I would have taken this at the beginning of the season especially considering that Farnham, who were promoted with us last season, have been relegated. Having said that two or three losses could have or even should have been wins which would have seen us finish as high as third. The top three teams just had too much power in the forwards for us to cope with, Our backs were a match for anyone.

ITS NOT OVER:- The 1XV have made it through to the Surrey Trophy Final versus Guildford RFC at Esher RFC on Monday 4th May at 1pm. Please come and support what could be a fabulous bank holiday afternoon. Guildford are in London 1, a league above us !!

THE U21s – They played three games in Christmas and Easter Holidays and won the Surrey U21 Shield beating Dorking 24 to 15 in the final last Monday having beaten Esher and Battersea previously.

The 2XV have a final game at London Irish on Saturday and a win will finish 3rd in the league.

As a preamble to the Internationals our two teams produced entertaining and high scoring games so that both sit in 4th place in their respective leagues. I attach Kelvin’s match report which of course you can find on our web site.

I look forward to seeing many of you at the Past Players Lunch on Saturday. The bar opens at 12 noon!!!

On a sad note I am sorry to inform you that John Clare died 2 weeks ago. It was totally unexpected but he died peacefully. His daughter Emma has sent the following message about funeral arrangements. Please let me know if you intend to attend:

“I wanted to let you know about the funeral arrangements for my Father now that we have finalised them.

We will be at Kingston Crematorium on Wednesday
8th April and the service will commence at 2.20pm.

There will be a wake afterwards at Malden Manor Bowls Club (on Malden Road, in Malden Manor Park, next to the playground) and everyone is more than welcome.

It would be most appreciated if you could send me an approximate number of who might be expecting to attend beforehand if possible.

For general enquiries, we are asking for family flowers only, but if anyone does ask, we are putting any donations in his memory towards a memorial bench in his name which will be placed at the Bowls Club. ”
Regards

‘Now is the winter of our discontent made glorious summer…’ Of course I am exaggerating – but only a bit. Early Spring sunshine and warmth, combined with a firm playing surface, provided a perfect environment for King’s to express their preferred expansive style to the full. The Reigatians started and finished competitively, but for the most part were swept away by as complete a team performance as most of us have ever seen from a King’s 1st XV. The weather attracted a large crowd of distinguished and disreputable King’s alumni, parents and friends, and they were treated to an expansive display of attacking rugby, with clinically accurate finishing.

We have of course known about the attacking potential in the King’s squad, and its realisation was as much a matter of focussed execution as of taking advantage of the perfect conditions. It was the King’s defence which in practice dominated the early stages, as waves of Reigatian attacks were effectively pushed back at or behind the gain line, with strong and technically effective tackling by all, and especially from the front row of Joe Mason, Captain Jonny Kiddle and Brett Williams.

Mason was outstanding, steadily securing turn-overs and penalties for King’s throughout the game. The pack established dominance in most phases during the first quarter, and this naturally set up the platform for more and more expansive play as our metaphorical scoreboard ticked-up throughout the first half. The King’s half backs Will Slater and Rory Jones combined well, and cleverly mixed probing runs and kicks with regular launches of the speedy King’s backs. The scoring was opened by a Gareth Stoppani penalty goal. Soon afterwards, Slater broke deep into Reigatian territory; he was supported by another accurate run by George Taylor, and Will timed his pass to send George over the line for the first try. Stoppani converted.
Stoppani added a further penalty goal (13-0), after which King’s increased the tempo and ambition of their attacks, and accumulated 26 unanswered points: Stoppani gathered a beautifully
directed and weighted kick ahead by Luke Minors to race into the corner; flanker Diggie Forshaw touched down at the conclusion of a successful driving maul; number 8 Alex Humphries powered over the line for a robust solo try, which secured a bonus point; and Luke Minors athletically caught Rory Jones’s diagonal kick to the right wing, and touched down in the corner. Gareth Stoppani converted three of these tries, and the half time score was 39-0 to King’s.

King’s naturally relaxed in the second half, occasionally trying some creative and adventurous attacking options. Further tries were recorded by Stoppani (from a clever kick by Minors), George Taylor (after one of his trademark outrageous steps inside…) and Tom Smith. Stoppani added two more conversions, and Minors slotted one of his own.
Reigatians surged back for a sustained assault on the King’s line in the last minutes of the game, and were rewarded with a close quarters try, which was converted. The whole King’s pack turned in an outstanding performance, as the three units achieved superiority in their more specialist disciplines, and all combined together to deliver solid, almost impenetrable defence, and effective support for the outsides. The back row of Forshaw, Humphries and Guy Tyler excelled in all phases, and the second row of James Currie and John
Walton produced their most dominant lineout effort of the season, combined with energetic all round play.

This performance was a great reward for the season’s efforts of captain Kiddle and coach Sam Richards, and of all who are committed to the Club. The team of course thoroughly enjoyed the afternoon, and they brought much pleasure to all who were lucky enough to have been there. How much more rewarding a way this was to spend a Saturday afternoon than watching musclebound mercenaries pounding over penalty goals in the Premiership…

Saturday’s match doubled up as a semi-final of the Surrey Trophy, and we will now play Guildford in the final, which is presently scheduled for the Spring Bank Holiday Monday, 4th May, at Esher RFC.

Back to winning ways, albeit a very tense game. After the dramas of the last few seasons its now a very relaxed team that sit 6th in the league with absolutely no chance of either promotion or relegation!